Global Head of Public Policy and Economic Graph at LinkedIn

Gender imbalance has been a topic of conversation for decades, yet little progress has been made at leadership levels. This is a pattern that continues even while evidence strongly indicates gender parity is key to creating more equal societies and economies.

This week the G7 countries are meeting in Germany to discuss critical challenges facing the world, including tackling the gender gap and getting more women into leadership roles.

LinkedIn’s data, which shows changes to the labour market in real-time, provides insight into how women are faring in the world of work, where we are making progress and where we still have work to do. Given the significant impact the pandemic has had on women and their working lives, we looked at what’s happened to women in the workplace over the last two years to understand what lessons we can take from the crisis and how we can build a recovery that is more equitable for all.

The lack of women in leadership 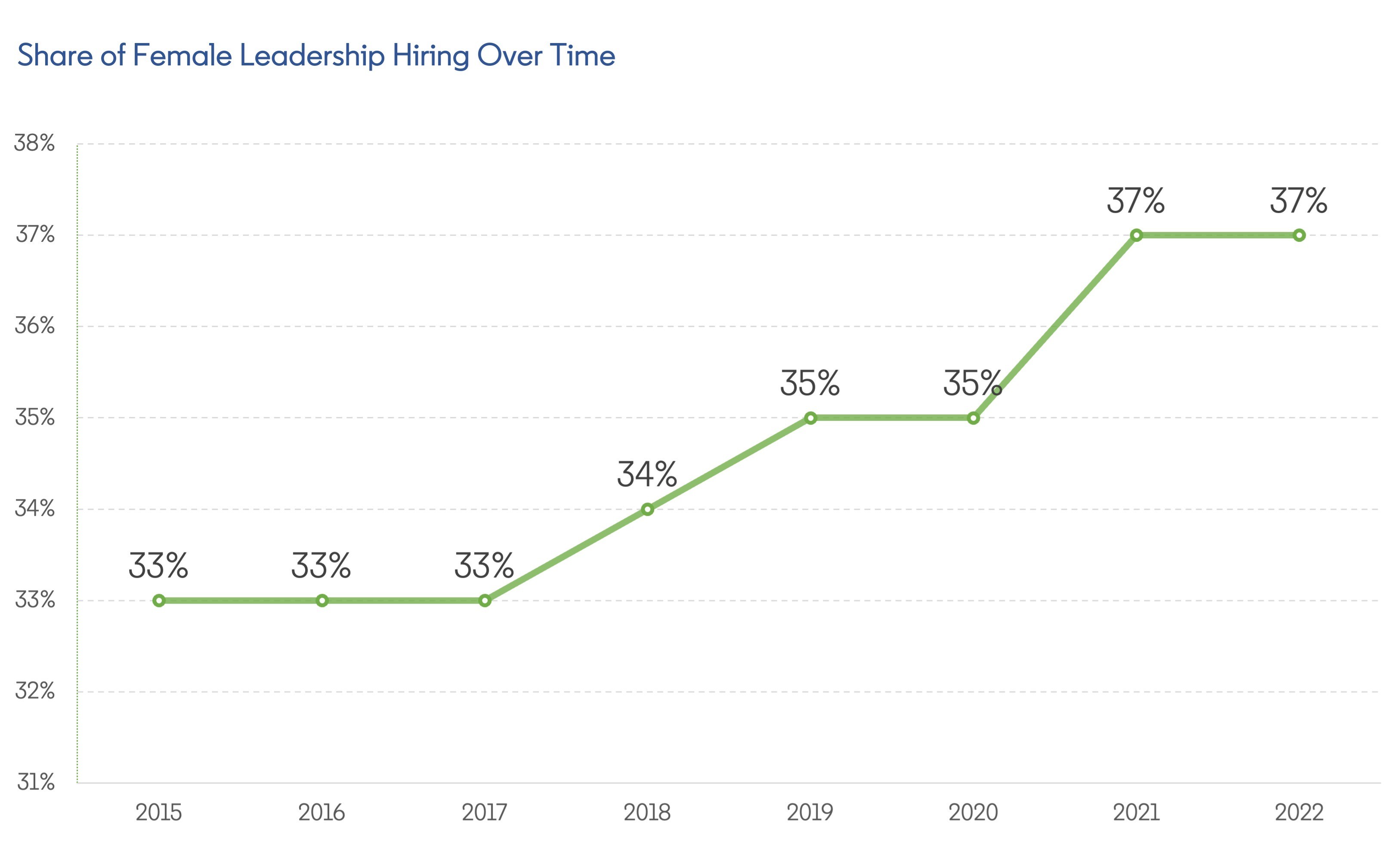 What emerged clearly during the pandemic is that progress towards gender parity is not a given. Progress can be and was stalled, and in some instances reversed. Over the past two years, the number of women hired into leadership roles stopped growing for the first time since 2015 and in a few industries, including Retail and Recreation and Travel, progress was reversed by more than 2 years.

Today, no country has reached gender parity in leadership.

Women account for less than a third of leadership roles in most countries. Among the countries we analyzed, the scale dips as low as 18% in India and 22% in Germany and almost reaches parity at 46% in Finland. 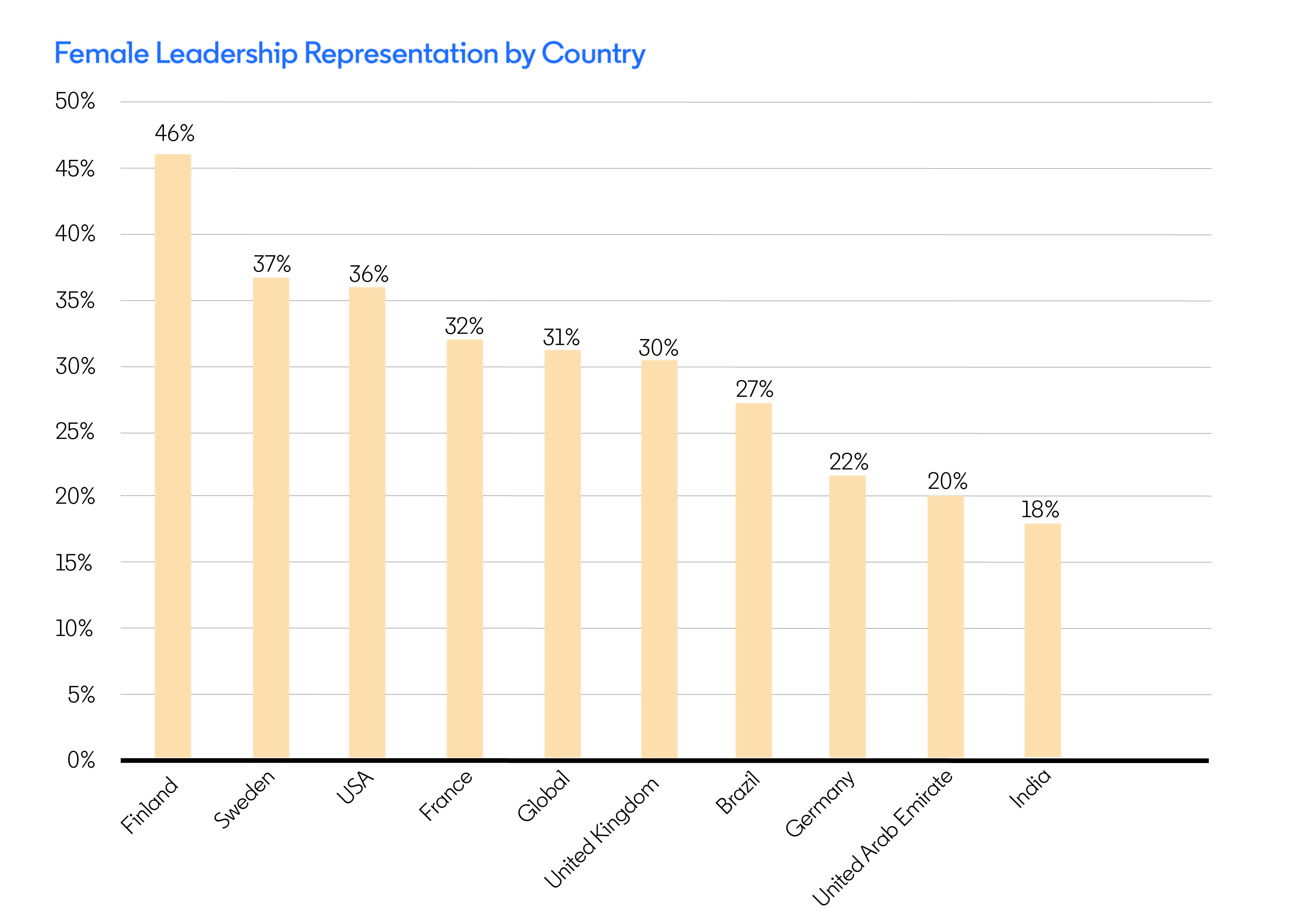 And the outlook by sector is no brighter. Globally, no industry has reached parity in leadership roles. The inequities are particularly stark when we look at industries that have been historically dominated by men, such as Construction and Manufacturing; women account for less than 2 out of every 10 leaders.

But even in industries like Education and Wellness and Fitness where more than half of the workforce is female, there still remains a gap in women in leadership.

A few Scandinavian countries have closed the leadership gap in Healthcare but even there the share of leaders is much smaller than the share of women working in the industry overall.

The barriers holding women back

So why are opportunities for women fewer than for men? And where do women face the biggest barriers in making it to the top?

Our analysis shows that it is particularly difficult for women to make it into their first manager role. In the career step from senior individual contributor to manager, we see a drop in the share of women compared to men of 9%. That means women are getting stuck making it to the first level of manager, way before they can even reach the leadership level. Simply put, this means the pipeline of potential women leaders is being curtailed right at the very start. This gap only continues to widen the higher up the seniority ladder you go.

Crucially, we see that women are promoted into leadership roles within their organisations at a lower rate than men. Comparing the global average for men and women in 2021, men were 33% more likely to receive an internal leadership promotion than women. 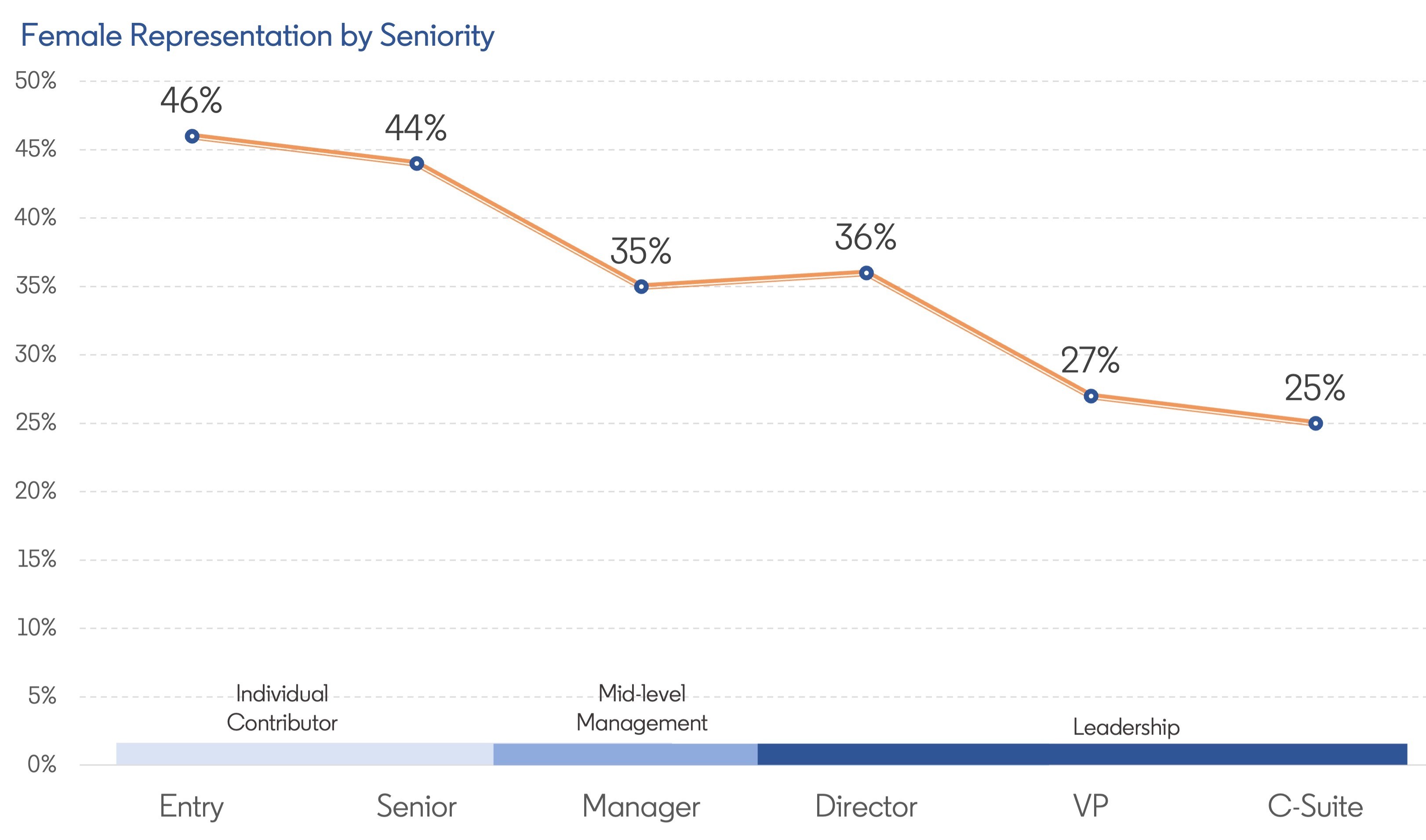 The data is very clear: we still have a large gap in women in leadership, and we need to do much more to accelerate progress in achieving equity in leadership.

We can start by tackling the challenges women face in taking the first step into leadership and getting them into management roles. Our data shows that women are less likely to be promoted internally. That means organisations need to examine their internal mobility initiatives, especially when it comes to their pre-manager female employees. For example, this could include creating targeted mentoring and hothousing programmes for women working at the pre-manager level as well as increased awareness and training about unconscious bias for hiring managers and interviewers at this level. If we don’t fix the equity gap that opens up at the entry-point to leadership, it will be much harder to create a pipeline of talented female leaders later down the line.

Secondly, organisations need to think about making sure their hiring practices are inclusive and give everyone equal opportunity to get a leadership role. That includes removing bias from job descriptions, having representative candidate slates, and including women on interview panels.

And thirdly, organisations need to think about flexibility. LinkedIn data shows that women are 24% more likely than men to apply to remote roles, underscoring the importance of flexibility to women and the role it plays in making workplaces equitable. However, to make sure that flexibility isn’t just ‘helping’ women carry the double responsibility of care and work, we need to make flexibility the standard for everyone.

During the pandemic, that so-called ‘double shift’ became too much for many women; because they had to step up at home it meant they had to step back from work, and some had to leave the workplace altogether. Flexibility can play a role in helping people to better manage caregiving responsibilities and encouraging people back into the workforce. Here at LinkedIn, we introduced the option for members to show career breaks on their profiles in part to help normalise career breaks and make unique career pathways something to be proud of.

While there is no silver bullet to reaching gender parity, there is a path forward. LinkedIn’s data is shining a light on what that path forward can be and the things we have to do to get there.

This body of work represents the world seen through LinkedIn data, drawn from the anonymised and aggregated profile information of LinkedIn's 830+ million members around the world. As such, it is influenced by how members choose to use the platform, which can vary based on professional, social and regional culture, as well as overall site availability and accessibility.

In publishing these insights from LinkedIn's Economic Graph, we want to provide accurate statistics while ensuring our members' privacy. As a result, all data show aggregated information for the corresponding period following strict data quality thresholds that prevent disclosing any information about specific individuals.

Gender identity isn’t binary and we recognize that some LinkedIn members identify beyond the traditional gender constructs of “men” and “women.” If not explicitly self-identified, we have inferred the gender of members included in this analysis either by the pronouns used on their LinkedIn profiles, or inferred on the basis of first name. Members whose gender could not be inferred as either man or women were excluded from this analysis.

The LinkedIn Founding Rate measures the number of LinkedIn members who added a new founder position to their profile in a year, divided by the number of members in that country (and gender) during that year. We then index this to the rate in 2016 to show how this rate has changed for each gender.